“It’s about bringing music to people, and like all art, it should be shared with everyone.”

Updated May 19, 2021: Please note a clarification: The mediator interviewed the neighbor and Jones separately and felt it was too confrontational to bring the two parties together at the time. From that date, the two parties agree to meet and plan a mediation.

Rico Jones, a professional musician and native of Denver, returned from New York to Denver just before COVID struck last year. He returned to his family home in the Denver Highlands and began playing live jazz music on his lawn during the pandemic.

When the pandemic struck around mid-March-April 2020, Jones found himself confined to his home with the rest of the world, including his Denver Highlands neighborhood. As a musician with 11 years of acting, freelancing, performing arts, and attending Manhattan School of Music, he discovered that even the pandemic couldn’t contain his music. What started out as inviting friends over to play together in its front yard in April 2020, to perform in front of an audience of three, quickly grew into a dedicated group of walkers, neighbors and an entire community sitting by the water’s edge. Sloan Lake water to listen to Jones’ music every weekend. The three-person audience quickly grew to 100 to 300 people.

It all started with an organic sequel to an article by Next Door, a three-piece jazz band that grew into a six-piece jazz band: saxophone (Jones), trumpet, trombone, drums, bass and piano. The community went out religiously on Fridays, Saturdays and Sundays for a quarantine respite from live jazz music. People would bring blankets and picnics and gather to watch the socially distant live concerts. 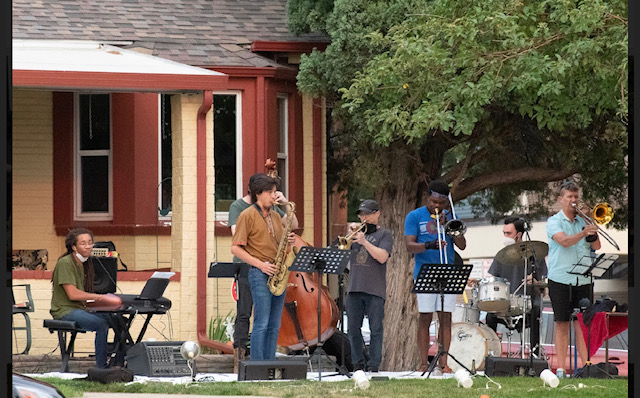 With the blessing of an exceptionally sunny and warm spring in 2019, Weather has cooperated with Jones to play every Friday, Saturday and Sunday (6:00 p.m. to 8:00 p.m.) throughout the spring and summer. But that ended when Colorado winter hit and its live music in the backyard was closed in October due to cold winter temperatures.

But as the slow spring thaw began to reopen things, nearly 500 responses from the community said they would appreciate live jazz music resuming in the spring, in May 2020.

And so Jones and his six-piece jazz band reopened their lawn and started playing again in May 2020, only to be closed not because of the weather, but after a neighbor filed a complaint with the city. from Denver. The neighbor’s complaint was filed with city council in May over the noise and Jones’ live jazz music has since been discontinued. Since the official complaint was filed, Public Health must investigate the noise violations.

A public health investigator visited Jones at his home to discuss the complaint and since then Jones and the neighbor have been ordered to mediate. Jones told us the neighbor refused to attend mediation, noting that the situation was too confrontational for mediation, so the issue of Jones’ live jazz music is on hold and pending until he hear from the city.

Jones said he contacted the neighbor to see if he could discuss it over coffee to come to an agreement, but has encountered no response.

Speaking to Jones he was devastated and said: “This is a community building event. It was wonderful to see people come out for a picnic. It is not my intention. to cause distress or agitation through the music. I wish we could have a civil dialogue so that I could sympathize and see their point of view. ”

As much as the community supported Jones’ live jazz concerts on his lawn, they also supported him during this time. Jones said he had received several text messages and many walkers stopped by his house to tell him how much they missed his music. The community has not only expressed support for Jones, but has also become very active with their city councilor, Jamie Torres, by sending him an email. Letters and emails from the community grew so plentiful that Torres asked Jones to tell people to stop emailing him.

Jones intends to return to New York when the economy opens again for musicians. In the meantime, he’ll be here in Denver, particularly in the Sloan’s Lake neighborhood, saving money and finding “a way to share music with people in the community. It’s about bringing music. to people, and like all art, it should be shared with everyone. “

Find Rico Jones at ricojonesmusician.com and contact him if you want to help “Bring Music to People”. Share your thoughts on this in the comments.